The authors propose dynamic response based condition assessment of prestressed box beam (PSBB) bridges that will be more realistic and cost-efficient. The hypothesis includes that the dynamic response is a sensitive indicator of the physical integrity and condition of a structure. The authors deployed two wireless sensor networks for collecting the real-time dynamic response of a 25-year old PSBB bridge under trucks with variable loads and speeds. The dynamic response of the bridge at its newest condition was collected from FE simulations of its 3-D FE models mimicking field conditions. The FE model was validated using experimental and theoretical methods. Fast Fourier Transform and peak-picking method were used to determine peak amplitudes and their corresponding fundamental frequencies at its newest and current condition. The analyses indicate a 37% reduction in its fundamental frequency over a 25-year service life. This reduction has been correlated to its current visual inspection to develop application software for quick and efficient condition assessment of PSBB bridges. The research outcome provides an efficient and cost-effective solution for bridge inspection and maintenance. 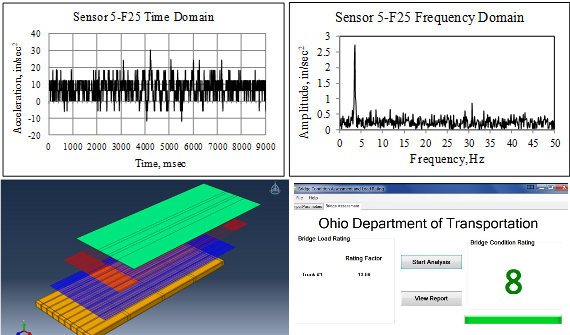 Proposed herein is a method for load rating of prestressed box beam (PSBB) bridges based on their dynamic response collected using wireless sensor networks (WSNs). The hypothesis includes that the health of a bridge is associated with its vibration signatures. Two WSNs were deployed on a 25-year old PSBB bridge, and trucks were run with variable loads and speeds for collecting its real-time dynamic response at current condition. Also performed were FE simulations of 3-D bridge models under vehicular loads to acquire the representative dynamic response at its newest condition. The bridge model was validated by field testing and numerical analysis. The Fast Fourier Transform and peak-picking algorithms were used to find maximum peak amplitudes and their corresponding frequencies. The in-service stiffness of the bridge was calculated to determine its load rating, which resembles the actual load rating of the bridge. The application software developed from this research can instantly determine the load rating of a PSBB bridge by collecting its real-time dynamic response. The research outcome will help reduce bridge maintenance costs and increase public safety. 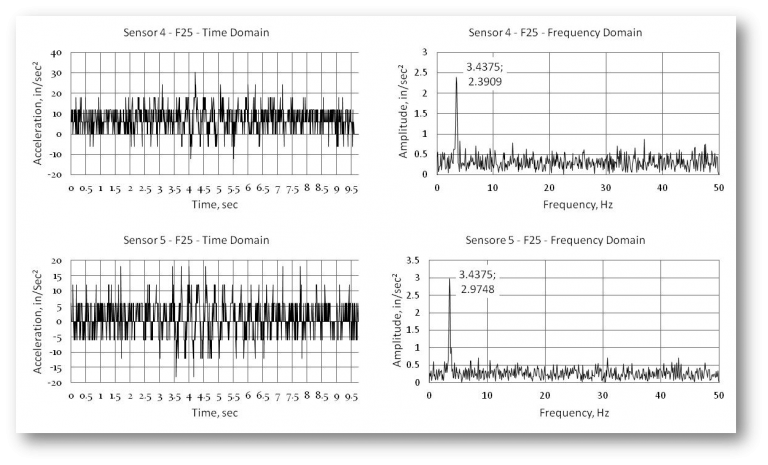 Shear failure is a common problem in concrete members. Currently, there is no established method for NSM FRP strengthening of concrete members in shear. In this research, four concrete beams were cast with regular steel reinforcement in flexure. The control beam had typical shear steel and the other three beams were strengthened in shear with CFRP bars attached using the NSM technique. Strain gages were attached with the shear reinforcement of all four beams at various shear critical locations. Strains during loading to failure of the beams were recorded using a data acquisition system. Performance of NSM technique was found to be very effective with no occurrence of delamination, debonding or fracture of FRP. Effective strains in the NSM CFRP bars were determined analyzing the collected strain data. A new formula to calculate shear strength provided by NSM CFRP bars has also been proposed. 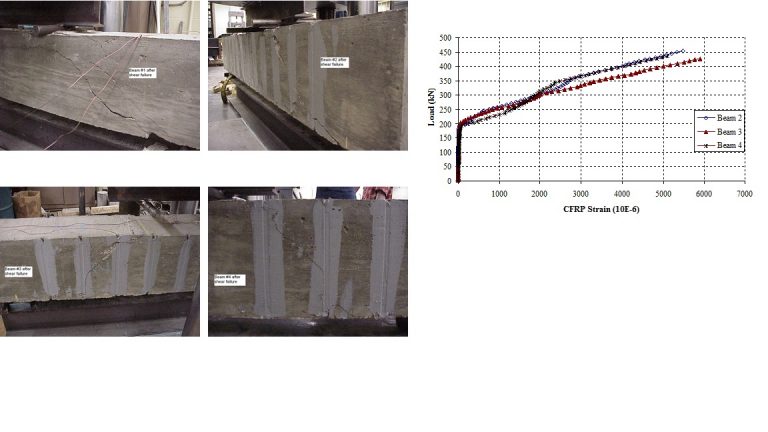 This research is focused on finding the structural condition of a precast deck section in the Lincoln Parking Deck at YSU using a Ground Penetrating Radar (GPR). A GSSI SIR 4000 mainframe system with a 1.6 GHz antenna was deployed for the radar survey. Small concrete slabs were prepared in the laboratory with fresh and corroded reinforcing bars. Corrosion in reinforcing bars was artificially developed using a Q-Fog cyclic corrosion tester. The GPR response from the slab, having the fresh rebar at varying depth, indicated that the reflection amplitude obtained from the scan of the rebar target decreases with increasing depth. Likewise, comparing GPR B-scan from the fresh and the corroded rebar indicated a qualitative and a quantitative difference in the result. The qualitative difference was observed as the hyperbolas (rebar reflections) showed weakening smoothness, brightness, and visibility with the increase in the amount of corrosion. In the same way, the quantitative difference was observed as there was a decreasing trend in the reflection amplitudes of each point of a hyperbola with an increasing amount of corrosion. The conclusion made from a laboratory experiment was applied for developing the corrosiveness map of a precast deck. 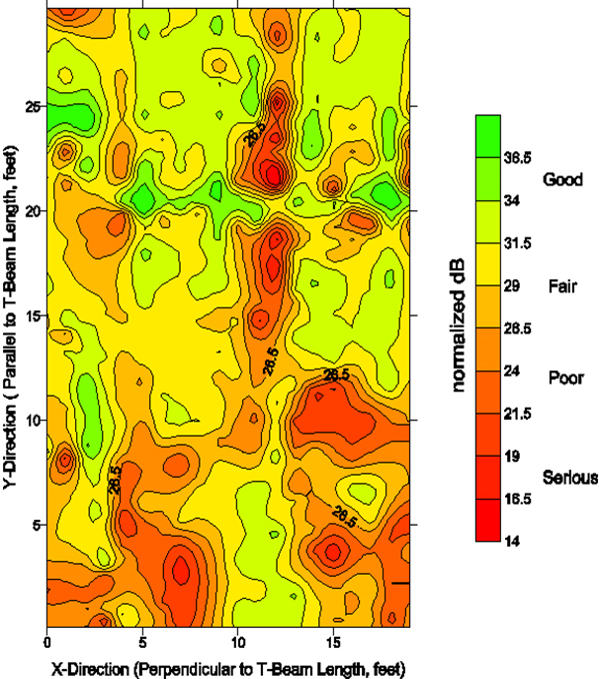 An Experimental Analysis of a Howe Truss in Timber Bridges

An experimental analysis was conducted on a wood Howe truss, frequently used in timber bridges, comprised of an upper chord, lower chord, compression diagonals, counter diagonals, steel vertical rods, and end verticals. The truss was intended to be post tensioned by tightening nuts on the ends of the steel vertical rods. This post tensioning was important due to the connection of the diagonals to the upper and lower chords. These connections are steel blocks that the diagonals simply bear on and have no ability to transfer neither tension nor rotational forces. For proper design and rehabilitation of a timber Howe truss bridge, it is necessary to understand the transfer of forces through the truss members, particularly counter diagonals. It is often difficult to properly model and determine the forces in the counter diagonals using structural analysis software. To validate the forces, experimental load testing was performed on a 1/8th scale physical model wood Howe truss with the use of strain gages and a moving load. Test results indicate that the counter diagonals carry a small percentage of the applied loads. However, it was inconclusive in determining the exact magnitude of the force. 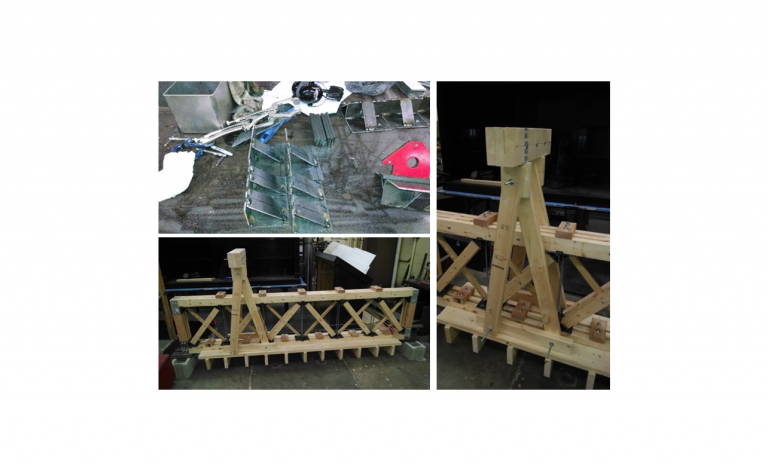 Corrosion in a Pedestrian Bridge at YSU

A pedestrian bridge linking Moser Hall and Cushwa Hall at Youngstown State University (YSU), Youngstown, Ohio, was built almost 40 years ago. Three hammerhead pier caps supporting the bridge deck have experienced severe corrosion at the bottom. This corrosion has led to spalling of concrete at multiple locations in all three pier caps and thereby exposed the rebars to open air facilitating more corrosion. At some locations, corroded steel bars are clearly visible at spalled locations and through larger cracks. An investigative study was undertaken to identify the causes of corrosion in these substructures and to propose a viable remedy to this problem. Although carbonation-induced corrosion is a slower process in a dry environment and mostly occurs in older structures, it was predicted that the corrosion in those pier caps was due to carbonation of concrete. Free carbon dioxide in the atmosphere reacts with alkaline hydroxides in the concrete to form carbonic acid. Carbonic acid, unlike other acids, does not attack the concrete paste but it lowers the pH value. A full-scale structural analysis revealed no major reduction in strength of the pier caps. Visual inspections and analytical study were conducted to ensure no major deficiency exists in the corroded concrete and steel reinforcement. After considering various repair methods, patching with low-slump dense concrete coupled with hydrophobic coating is suggested as a remedial measure to protect the substructure from further deterioration. 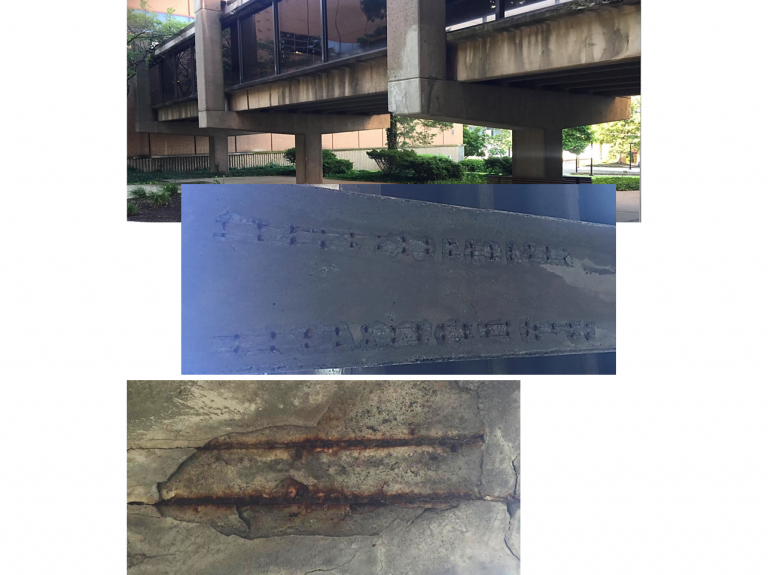 This research addresses the causes and long-term solutions to the bumps that commonly develop at bridge/approach slab and/or approach slab/pavement interfaces. Moment capacities and applied moments of approach slabs for seven different State Departments of Transportation (DOTs) were determined using MathCAD, and compared. The value of internal moment capacity of the Ohio Department of Transportation (ODOT) approach slab was found to be greater than the value of applied moment capacity, indicating that a new approach slab would not fail even if soil support were lost. A 3-D finite element analysis (FEA) was performed using ALGOR to find the stresses and deflections for a new approach slab of 25 ft slab length under extreme HL-93 truck static loading, using ODOT design recommendations. Maximum deflection was predicted to be 0.19 in with soil support and 1.34 in without soil support. Repetitive loading may cause long-term damage to approach slabs when soil support is lost. Laboratory tests for Sieve analysis, Liquid limit and Plastic limit were also performed on soil samples collected from one bridge site without a significant bump and four bridge sites with significant bumps around the greater Youngstown, Ohio, area.   The results show that settlement of approach slabs was greater, and bumps more severe, for soils with larger percentages of silt and clay. This study indicates that efforts to reduce bumps at the pavement-bridge interface should focus on geotechnical factors and maintaining proper soil support under approach slabs. 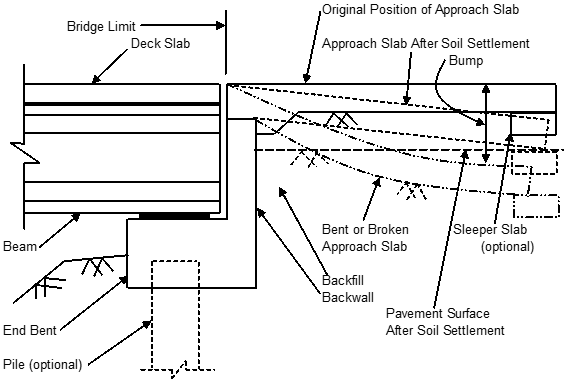